The 7 Best Low Flow Toilet for Water Conserving in 2022

Low Flow toilets have become increasingly popular over the past few years, with this primarily being driven by the variety of benefits that they offer. The more obvious example of these can be seen in the water-saving capacity that they have.

As a result of this, people who have purchased the products have seen reduced water bills while also having less of an effect on the environment. Despite their rising popularity, however, many people have had difficulty finding the best Low Flow toilet for their needs.

Much of this is because there’s a seemingly overwhelming abundance of choices. However, part of this is because several factors will have to be looked at when choosing the product. Many people may not be conscious of this, which could result in their choice being more complicated than they originally believed.

When many people are looking, they’ll primarily look at the best water-saving toilets on the market. This is only one factor that you should look at when deciding, with a few others playing essential roles in the choice. That being said, there are quite a few Low Flow toilets that stand out from the rest in terms of quality and performance.

There are quite a considerable number of features to boast about with this TOTO Eco Ultramax One Piece Toilet, with much of this focusing on ease of use. Along with being stylishly designed, the toilet uses SanaGloss coating to prevent the build-up of bacteria and other unwanted chemicals. 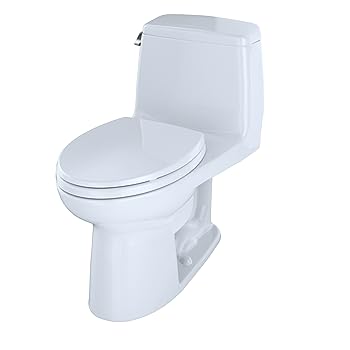 As a result, you shouldn’t have to worry about the spread of unwanted germs. Alongside this is the fact that it’s much easier to clean than many of its competitors, which is something that many of us may want to take advantage of.

In terms of flushing, there are also a variety of benefits, as its 3-Inch flush valve is much larger than many others. As a result, this can flush faster than its competitors, with this also being a lot quieter than you might expect.

However, there are a few drawbacks, with one being seen in the toilet’s height. While this could be comfortable for taller people, it could mean that it’s not an appropriate choice for children. Lastly is the fact that it’s not as long-lasting as competitors, so it may need to be replaced faster than others.

Nobody wants to spend a considerable amount of time installing their toilets, and even fewer want to spend an extended period having to clean the toilet itself. These are two areas where this American Standard H2Option low flow toilet shines. 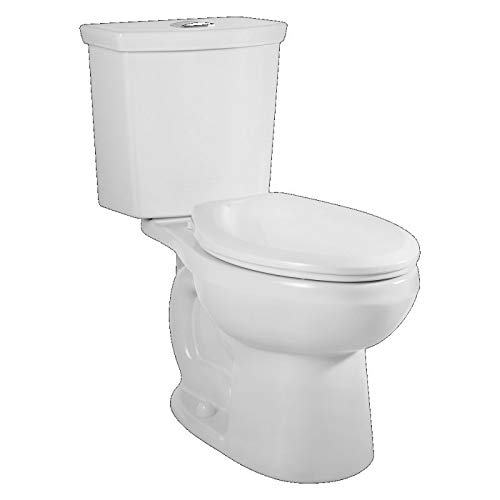 With its Speed Connect system design, installation time is cut down significantly compared to the majority of other toilets, regardless of whether you’re doing it yourself or hiring a professional. Alongside this is the EverClean surface that coats the product and which prevents the build-up of germs and bacteria.

This surface also makes it quite quick and easy to clean. Dual-Flush technology also means that this American Standard toilet uses much less water when it’s flushing and is much quieter when doing so. Much of this is seen without compromising on performance.

There are some drawbacks to this model, with one being that it’s not as durable as others. Where many people may find an issue with this, however, is that it has a habit of clogging, which may be a result of its Dual-Flush technology.

Few low flow toilets offer a significant amount of style without compromising on the overall quality of its performance. This TOTO model, however, is one of the rare ones that do, as it offers a much more appealing design than many of its competitors while still providing a few stand-out features. 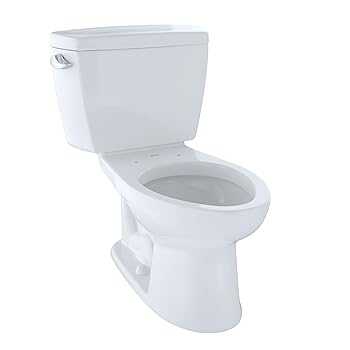 Chief among these is its GMAX Flush technology, which means that it can flush much more down while using less water. Much of this is driven by the larger flush valve and fully glazed trapway.

It should be remarked, however, that this isn’t as long-lasting as many of its competitors and can be louder than others when flushed.

A lot of people will look for a toilet that offers a large amount of efficiency when it comes to water usage. This is one of the core advantages of this Niagara, which features a pressure-assist flush that drastically cuts down on the amount of water required to flush it. 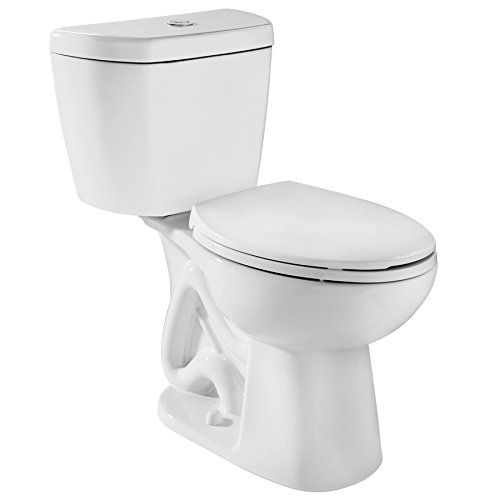 When it is flushed, it’s also much quieter than many of its competitors, which some people may want to take advantage of.

Alongside this is the fact that it has been designed to be disability-friendly, which makes it quite easy to use, regardless of your condition. However, it has been noted that there are a few issues with this model, with some stemming from the low water usage.

In some cases, there may not be enough water used when flushing, which could result in some not being completed properly. This has a domino effect on making the toilet clog more often than many people might be comfortable with.

The height of a toilet can make a much more significant difference in its use than many people might believe. This is primarily driven by how easy, or difficult, it can be to sit down on and stand up from. This is where this model shines, as it’s noticeably taller than many of its competitors, allowing it to be used much easier than competitors. 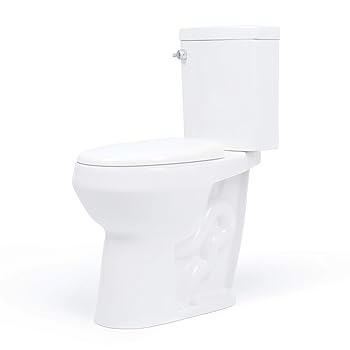 Alongside this is a variety of other features to take advantage of, such as a slow-closing seat that shouldn’t damage your bowl. This is also one of the longer-lasting low flow toilets that you can purchase, with this being extended to many of the metal parts, which have been treated against corrosion.

There are a few drawbacks, however, with the majority of these focusing on the toilet seat. Most notably, this isn’t the most comfortable to sit on and is flimsier than others. As a result, you might want to consider purchasing a different seat with this model; it may break quickly otherwise.

Comfort will play a specific role in whether or not we pick a toilet, which is one of the few things that this KOHLER has in spades. Much of this is driven by the toilet’s height, which also makes it much easier to stand up from and sit down on. 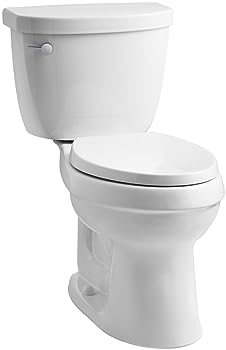 Alongside this are a few extra benefits, such as the fact that this is much easier to clean than the majority of its competitors. There’s also a significant improvement in water efficiency compared to others, which is one of the main drawing points of any low flow toilet.

Unfortunately, there are two notable drawbacks to this, with the first being that it may develop a leak quite quickly, which means that you’ll have to get it repaired or replaced much faster than others.

Lastly is that the tank may not always fill as much as it should. This could mean that it shouldn’t have as effective a flush as it typically would the next time that you use it, with this being a more common issue than many people might want.

This American Standard model boasts quite a large number of benefits, with the majority of these being focused on making it as easy to use as possible. Chief among these is the EverClean surface which cuts down on much of the cleaning that you’ll need to do. 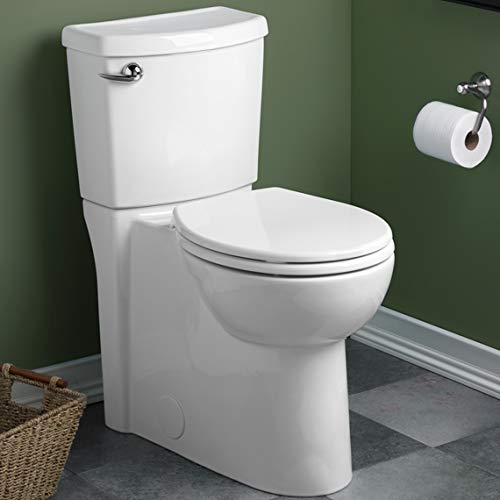 This also ensures that there’s little chance for germs and bacteria to grow, especially with a modicum of cleaning put in every so often. There’s also a slow close seat which should ensure that it doesn’t drop and become damaged once you’ve gotten up.

A large flush valve also makes sure that there’s an efficient flushing toilet that doesn’t make much noise. There are a few drawbacks to this American Standard, however. The first of these is that it can be much more difficult to install than many of its competitors and may need the help of a professional.

Lastly is the seat, which can be much more uncomfortable than many people may want.

When it appears to pick the right low flow toilet for your needs, there can be a considerable number of things to look at, with some being more important than others. While price will naturally play a role in this, it shouldn’t be the first thing that you look at.

Instead, there are several more important factors that you should look at first to see how much value you’ll be getting for your money. As such, you should focus on the below when buying a low flow toilet.

How much accessible space you have in your bathroom is the first thing that you’ll need to look at. While you may believe that all toilets are the same size, this isn’t the case, as many can be much longer, wider, and even taller than others.

There are also a variety of toilet bowl shapes on offer, each of which may play a role in whether or not it will fit.

If you’re looking for a low flow toilet, then there’s a significant chance that you want to cut down on your water usage. While all of the available models will have significantly lower water consumption than regular toilets, it doesn’t mean that they all offer the same level of efficiency.

Instead, there are some brands and models that will be much better in this regard than others, which means that you may want to pay a certain amount of attention to this. Related to this is whether or not the flushes will be effective.

This is primarily because some models will offer less water usage per flush, but may require more flushes to evacuate the bowl. Should this be the case, then it can undo many of the potential benefits that the low volume of water would otherwise have offered.

Choosing the best Low Flow toilet doesn’t have to be as challenging as many people might have you believe. Instead, looking at certain features and knowing your needs will make this much simpler. As such, you’ll need to be as informed as possible when before you go looking for the products.

While this might seem as though it will take a large amount of time, it shouldn’t. It will also save you a considerable amount of time and hassle during the buying process itself, so you should see it as something of an investment.

Know what you want and what you’ll have to look for, and you’ll save yourself the headache and ensure that you’ve got the right toilet for your needs.

Related Articles
We will be happy to hear your thoughts

How To Fix A Kohler Toilet That Keeps Running – DIY Guide

Top 15 Above Ground Pool Ideas On a Budget

How To Install A Tankless Water Heater : DIY Guide

How To Build A Composting Toilet : DIY Guide